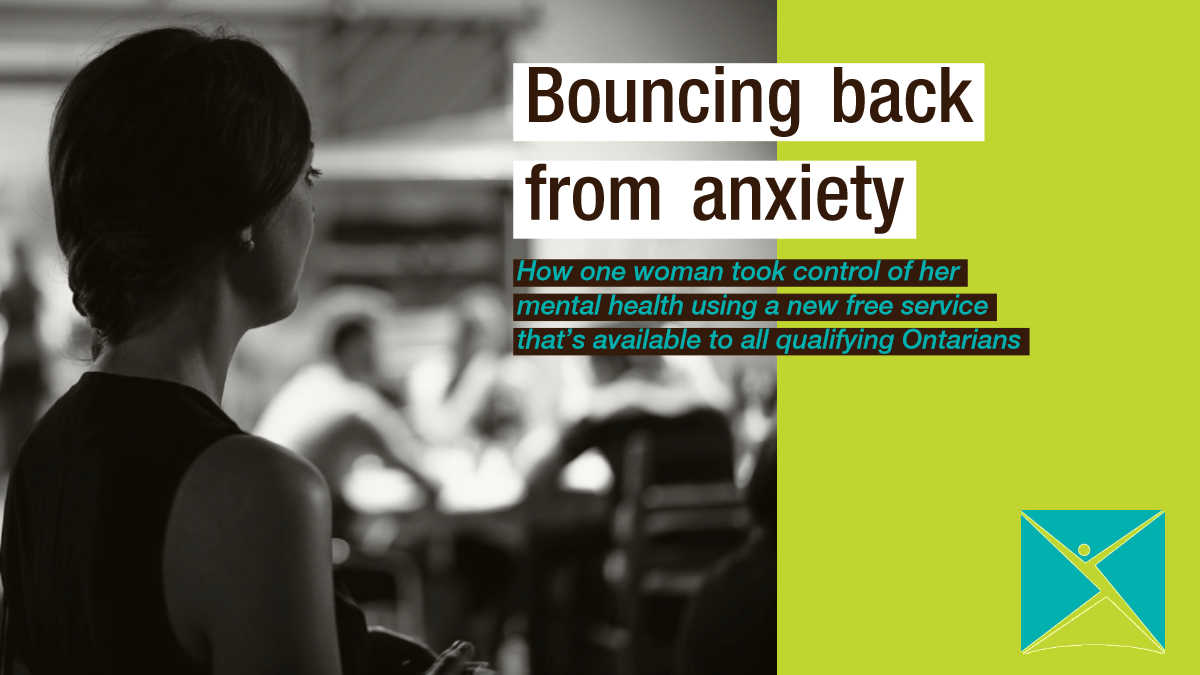 It was “picture day” at the federal government offices in Ottawa where Annie Dodds* works full time, and she missed her individual appointment to have her photo taken.

Annie was then advised that the opportunity to retake photos of all remaining staff would take place in the cafeteria during lunch hour.

For some people, such a scenario would present a convenient opportunity to accomplish a trivial but necessary task: you stroll in, have your picture taken, then grab a bite to eat with your friends. For others, the idea of having their picture taken in front of all their co-workers—in a packed cafeteria no less—would be more than enough to trigger some anxiety.

That was the case for Annie.

“I walked in,” she says, “and then I walked right out and had a panic attack.”

Annie, a 40-year-old mother of two, knew she needed to address the mental health issues that persisted through her daily life, but couldn’t imagine a scenario in which she would ever have the time to do so.

So naturally, months later when she received a pamphlet for BounceBack: Reclaim your health, she knew it would be the solution for her.

BounceBack is a skill-building program designed to help adults and youth 15 years of age or older manage their symptoms of depression and/or anxiety. The free service features telephone coaching (overseen by clinical psychologists) and workbooks, in addition to access to a helpful series of videos.

“I looked it over and thought, ‘This might work for me,’” says Annie.

The day she received that pamphlet, Annie was attending an event in celebration of the International Day of the Girl Child with her 10-year-old daughter—a wonderful occasion and break from the irritability and anxiety she had been experiencing—and she noticed a booth from the Champlain East division of the Canadian Mental Health Association.

There she found CMHA staff Angele D’Alessio, who is now engagement coordinator for the BounceBack program, and an instant connection was made.

“I could immediately tell through our conversation that Annie seemed quite overwhelmed and stressed by the challenges in her life,” says Angele. “I knew she could be a good candidate, as the program is ideal for individuals who want to make positive changes in their lives.”

Based on Angele’s advice, Annie brought the BounceBack pamphlet to her next appointment with her family doctor, who reviewed the literature and agreed that the cognitive behavioural therapy (CBT) offered in the program would be the right fit for her and set in motion the referral process.

Annie would soon get the help she needed without having to travel to appointments or adjust her schedule to accommodate for therapy sessions.

Not long after that, Annie was put in touch with her BounceBack coach for orientation and was delivered her set of workbooks. She chose to receive hard copies of the books, as she’s a visual learner and prefers the tactile experience.

In combination with her conversations with her coach, Annie chose to review the provided workbooks during designated “mommy time” she blocked off throughout a given week.

She made fast work of applying the skills she was learning and reviewed the materials with her coach at three-week intervals, a decision they made together. During their calls, Annie and her coach scored her mood and how she was feeling. Over time, her coach kept track of her progress and advised accordingly.

“He really genuinely cared and was empathetic to my situation,” she says. “He has been nothing short of amazing.”

The first workbook was so helpful, Annie went on to review 10 books in total and regularly checked in with her coach—there are 20 available workbooks. She discovered all sorts of tools that allowed her to cope with her anxiety.

The materials she found in the workbooks provided her with the skills to be aware of the things that would typically provoke an angry reaction from her, and she was better able to cope with them. In fact, she says she’s found the BounceBack lessons applicable throughout her daily life.

Annie points specifically to the analysis found at the back of each volume, in which the “five areas approach” allowed to her to apply the lessons to her everyday life.

“In the past, I was just angry, and I would lash out at a situation and get very mad and moody,” she says. “This program has completely changed the way I handle things now. I think of the five areas before I react.

“…and it has allowed tremendous change in my relationships.”

Since wrapping up the program, Annie has become a BounceBack’s champion. She tells everyone in her life about the profound effect it has had on her—including her coworkers, with whom she now enjoys lunch in the same cafeteria that once triggered such anxiety.

“This program changed my life,” she says. “I’m sure it can change the lives of many others too. I’m letting everyone I know that they can benefit from the program as well. That’s what I hope to give back.”

She says she still suffers from anxiety but is now equipped to cope with it. She’s kept Angele looped in to her progress as well:

“Annie has completed the program and is now an ambassador for BounceBack,” says Angele. “She believes the strategies she learned have been life changing. I hardly recognized her the last time I saw her: she was smiling, sociable and much more relaxed than our first encounter several months before.”

“It is obvious to me that BounceBack has the ability to transform lives,” she adds, “but the first step begins with people like Annie who have a desire to bounce back and reclaim their health!”

*Annie’s name has been altered to protect her privacy.

With thanks to Angele D’Alessio, Regional Stakeholder Engagement Coordinator, BounceBack